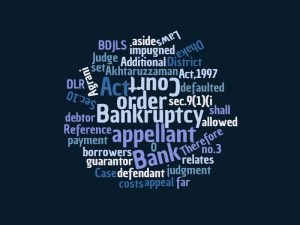 The respondent no. 1, Agrani Bank as plaintiff instituted Bankruptcy case in the Bankruptcy Court (Court of the Additional District Judge, Dhaka). The Bank granted a loan of tk. 2,86,000 to the respondent no. 2 & 3 and the appellant stood guarantor for the loan. Despite repeated demands the borrowers and the guarantor have defaulted in payment of loan and under sec.9 of the Bankruptcy Act,1997 (the Act, 1997) the plaintiff served formal demand notices upon the defendants, which having not been heeded to by the defendants, the plaintiff filed suit for adjudicating the defendants as bankrupts. Being aggrieved by the judgment and order the defendant no. 3 as appellant has filed this appeal under sec.96 of the Act, 1997.

The learned advocates of the appellant submitted that – the word ‘debtor’ having not been defined in the Act, 1997 to include a guarantor, the suit against the defendant no. 3-appellant is misconceived and should have been dismissed.

They next argued that even if the guarantor is deemed to be included within the meaning of the word ‘debtor’, the appellant not being guarantor of the borrowers for repayment of money borrowed by them, rather the manager of the respondent bank, taking advantage of his relation with the appellant requested him for being guarantor on humanitarian ground; so no proceeding under the Act, 1997 could have been initiated against him.

They further contended that no notice of demand under sec.9(1)(i) of the Act, 1997 in the name of the appellant having been addressed, as required by rule-33, and service having not been proven according to law, the whole proceedings against the appellant is illegal and has been vitiated for want of notice. So, the suit is not maintainable against the appellant for non-compliance of sec.9(1)(i) of the Act, 1997.
Unless the word ‘debtor’ is defined then the ordinary dictionary meaning – ‘who owes money to another’ should be taken. Sec.10of the Act, 1997 has not given the power to the court to adjudicate any other person other than the debtor as ‘bankrupt’. Reading the guarantor in this section will amount to reading something in the law which is not there.

The learned advocate for the respondent no. 1, submits that – although the word ‘debtor’ has not been defined by the Act, but the facts remain that the guarantor is equally liable for the debt in view of sec.9(1)(i), the creditor bank made a valid demand both upon the appellant and upon the defendant no. 1 & 2 since failing to pay the amount due to the bank they committed an act of bankruptcy and therefore, can be adjudicated as bankrupt under sec.10 of the Act, 1997.

He also argued that – liability of the borrowers as well as the guarantor is equal and mutually co-extensive. Therefore, debtor as well as guarantor can be adjudicated as bankrupt. He also submits that sec.10 of the Act, 1997 should be read with sec.128 of the Contract Act, 1872, which provides that the liability of the surety is co-extensive with that of the principal debtor, unless it is otherwise provided by the contract.

The Bankruptcy Act, 1997 is a special law and therefore, must be construed very strictly and unless the guarantor is brought within the definition of the word ‘debtor’ specifically, the guarantor cannot be saddled with the liability for being adjudged as bankrupt. Absence of the word ‘guarantor’ in sec.10 of the Act, 1997 indicates that, it was not the intention of the legislature to saddle the guarantor with additional liability of being adjudged as a bankrupt. So, the liability of the guarantor has not been created by sec.9 of the Act, 1997 nor any power has been given to the bankruptcy court to adjudicate the guarantor as bankrupt.And as no notice has been served upon the defendant no.3 either at his permanent or present address, sec.9(1)(i) has been grossly violated. So, this suit is not maintainable for want of proper service of notice.

Therefore, this appeal is allowed and the impugned judgment and order are set aside so far as it relates to defendant no.3, the appellant and there shall be no order as to costs.