Arifuzzaman vs. the state and another 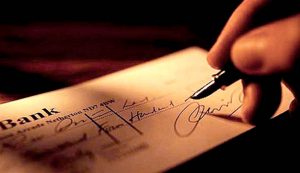 Md. Arifuzzaman, the accused, issued a cheque in favour of respondent no. 2 for an amount of tk. 20,00,000(twenty lacs only) out of the business relationship and for insufficiency of fund the cheque was dishonoured. Under sec.138 of the Negotiable Instruments Act-1881 (the Act,1881) he was sent a notice by registered post demanding payment, but he did not come forward to adjust the payment within the stipulated period. Hence, the complainant filed a petition in the Chief Metropolitan Magistrate Court, Dhaka. Then, the accused petitioner surrendered and obtained bail and also filed application under sec.265C of the Code of Criminal Procedure (the Code) for being discharged from the case. Rejecting the application, the judge framed charge against him under sec.138 of the Act, 1881. Challenging the order, he filed a revision application under sec.439 & 435 of the Code. The Division Bench of High Court Division which heard the Rule also discharged the same and hence, this petition for leave to appeal.

Mr. Mahmud again Contended that, the cheque was dishonoured not on the ground of “insufficiency of fund” but for the dissimilarity of the signature of the accused-petitioner on the cheque. So, it could not be said that, the offence is contemplated under sec.138 of the Act, 1881. So, the charge against the petitioner is liable to set aside.

Mr. Mahmud further contended that, the accused petitioner filed a suit in the Assistant Judge Court of Narayanganj, where it would be decided whether the accused-petitioner issued the dishonoured cheque or not and applied for a stay of the proceedings till the decision of the said title suit.

On the above submission, Mr. Mahmud prayed for granting leave.

The High Court Division found that the petition of the complaint was filed complying with all the requirements of secs.138 & 141of the Act, 1881 and also found that the abbreviation etc. (for etcetra) used in the heading of sec.138 of the Act,1881 covers any ground or reason, whatsoever, for which a cheque is bounced. The High Court Division further found that, the crossed cheque having been returned unpaid, offence under sec.138 of the Act, 1881 was committed.

Now, the questions to be decided in this petition for leave to appeal are – (i) whether the dishonoured cheque being crossed cheque ‘account payee’ for insufficiency of fund would attract the mischief of sec.138 of the Act,1881 or not? (ii) whether the letter issued by the drawee bank about the mismatching of the signature of the drawer with the “signature made on the cheque” can be taken into consideration in deciding of the merit of a revision application preferred by the petitioner against the order framing charge under sec.138 of the Act,1881. (iii) whether a pending civil suit in respect of the dishonoured cheque can be used as a shield by the accused or not?

So far as the last question concerned, the court is of the view that – the operation of sec.138 of the Act, 1881 cannot be obstructed, or in any way circumvented by the mere fact of filing of a suit by the drawer of the dishonoured cheque in civil court. However, if the holder or payee gets hold of the dishonoured cheque by fraudulent means or forgery the drawer shall have the liberty to take such defence during the trial.

So, the court found no reason to interfere with the impugned judgment and order passed by the High Court Division and therefore, dismissed the Petition.