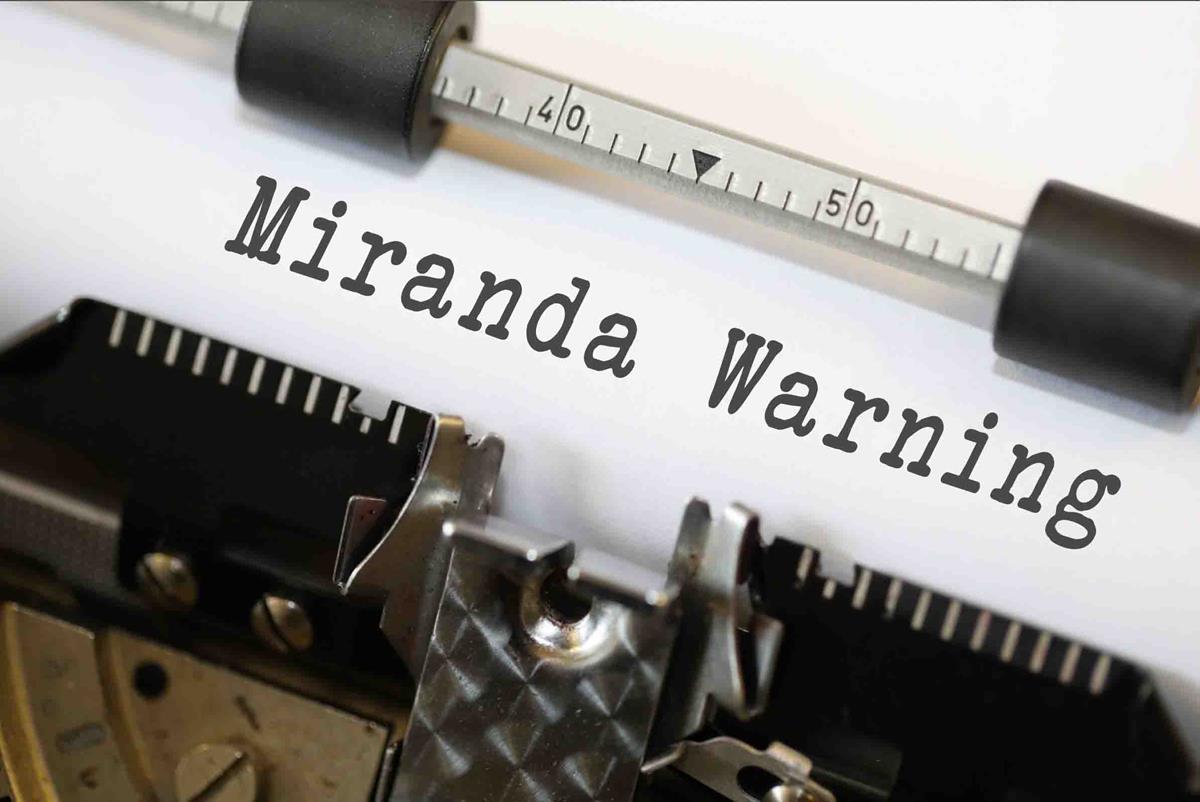 The hardcore Hollywood Movie fans have watched that scene on silver screens countless times, where a police officer shouts these common phrases, ‘you have a right to remain silent’, ‘anything you say can be used against you in a court of law’, ‘you have a right to presence of an attorney’ and ‘if you cannot afford an attorney, one will be appointed for you prior to questioning’, at the time of making an arrest. One may presume that these are some hit dialogues written by some famous script writer. But contrary to the common perception, these warnings are the outcome of a famous US Supreme Court’s decision from Miranda vs Artizona 348 US 436, which is also simultaneously known as Miranda warnings or Miranda Rights.

The US Supreme court passed this landmark decision as it found gross violations of accused Miranda’s fifth and sixth amendment rights as per the US constitution. Fifth Amendment right protects a person against being compelled to be a witness against himself or herself in a criminal case. Whereas sixth amendment gives the accused to be informed the nature and cause of accusation and right to get the assistance of a counsel in his/her defence. The Court also opined that Miranda rights extend to right to counsel during the police questioning. It is a set of rights that provide the basic safeguards of an accused person as enshrined by the Fifth Amendment of American constitution.

Later on, Berkremer v. McCarty, 468 U.S. 420 (1984) case also echoed the decision of Miranda case. In a later case titled Mosley v. Michigan, 423 U.S. 96 (1975), interpreting the scope of the Miranda rule, the Supreme Court made clear that interrogation must end, at least for a period of time, whenever the suspect exercised the right to remain silent. Although Harvard Law School Professor Alan M Dershowitz observed in his bestseller book, “Is There A Right To Remain Silent?” the famous right to remain silent is no longer remain an exhaustive right as the concept of future crime prevention has taken the front seat after 9/11. As long as the information is not used in the court of law, all forms of coercion and torture are allowed in the name of state security or national defence.

In Bangladesh, the recent atrocities carried out by the police have brought the issue of right of the accused to the front-line again. In the awake of some very recent incidents in the capital Dhaka shows the situation has become more severe. Police allegedly beaten up the Dhaka City Corporation official Bikash Chandra Das and another Bangladesh Bank official Golam Rabbi was picked up, brutally beaten. The Sub-inspector Masud Rabbi allegedly demanded extortion of 5 lakh taka from Golam Rabbi. These incidents are the proof of worst arrest scenario of Bangladesh.

The extent of rights enjoyed by an arrestee in Bangladesh is very limited, a country where Art. 33 of the Bangladesh Constitution, Special Powers Act (SPA) 1974 and sections like 54 of CrPC exist. Art. 33 of the Constitution of Bangladesh allows government the scope to use various draconian laws, such as SPA to detain any person it wishes. Again arrest without warrant and arrest by persons in civil dress is also very common here. At the time of arresting a person with warrant, Section 80 of CrPC states that warrant must be shown to person arrested. But the reality is quite different. There are numerous incidents of arresting person without showing the warrant, in many cases they didn’t disclose the identity of being police officer. With a microbus wearing civil dress a lot of people have been picked up and later found as shown arrestee in the police custody.

So the idea of incorporating rights, like Miranda might sound a ‘utopian’ thought, and prima facie it is. Question arise though, how far do we recognize the Miranda rights in Bangladeshi laws?

If we observe Article 35(4) of Bangladesh Constitution, it clearly states that no person shall be compelled to be a witness against himself. This Article holds the essence of Fifth Amendment of the American Constitution, violation of which gave rise to famous Miranda Rights itself. Moreover, the trial stages also expand the scope of this right. Section 164 of CrPC states that in case of confession, magistrate shall explain to the accused that he is not bound to make any confession.

So the first two warnings are covered and now the last two warnings of Miranda Rights, which covers the right to get legal representation and state’s responsibility of ensuring access to justice to the people who can’t have access to justice due to financial incapacity. Article 33(1) of the Constitution guarantees this right to consult and be defended by a legal practitioner of choice and we also have government free legal aid programme under Legal Aid Services Act, 2000 as a reply to the last warning.

Free Legal Aid Services is a great initiative taken by the government, but still most people who are required to know about these initiatives are not aware of this programme. Vulnerable people still think that justice comes at a cost, so better not go for it. So if an arrestee at the time of arrest get to know that the state will provide him a lawyer if he can’t afford a lawyer, the effectiveness of this programme will surely increase.

Evidently, Bangladesh does not have Miranda rights by the name but we already have all the ingredients of Miranda rights in our own existing laws. But it is a matter of regret, most people still do not know about the existence of these rights. And the law enforcing agencies are taking advantage of this situation continuously. .

Now, the point of argument remains is that, what big changes are necessary for incorporation of Miranda rights or somewhat like Miranda Rights bring to the Criminal Justice mechanism of Bangladesh? As explained above, no big changes are sought for. The only thing needed is that these rights be communicated with the detained person at the time of arrest.

In our country most people are not aware of their basic rights, let alone this ‘Right to remain silent”. It may not bring revolutionary changes, but it might make an arrestee aware that he is under no obligation to make a confession under any circumstance. It also can help to make him understand that, he has the right to remain silent in interrogation and custody period and the burden is on the law enforcement to collect enough evidence to incriminate him. Another point needs to be mentioned here, in case of obtaining confessions by threats, coercion or physical torture by the law enforcers, US court ruled in Brown v. Mississippi, 297 U.S. 278 (1936) that, confessions thus so obtained were involuntary and inadmissible because they are the product of police violence and threat during interrogation.

Similarly, in Bangladesh confessions to police officer are not admissible under the Evidence Act, 1872. We already have some safeguards for accused through laws, but implementation of these safeguards can rarely be seen. In the year of 2016, we have to come up with something more practical and understandable in the terms of both legislation and practice. That’s where answer to justification of this Miranda Right in our practice lies.

The situation of arrested persons in Bangladesh is horrific. There are lots of allegations of abduction against the law enforcement agencies. Only uttering few fancy rights in front of arrestee might not bring a revolution but it may create some sort of understanding of several rights in an arrestee mind. Why not expect a bit of something by incorporating the essence of this Miranda right in practice, when the effect of arrest offers nothing but misery?

Iftekhar Sahariar is currently persuing his LLB Degree in University of Rajshahi in his final year. He is the Senior Editor of Bangladesh Journal of Legal Studies. Continuing with excellent academic result he brought glory for his department as well as for his University in co-curricular activities. He has successfully completed an internship under USAID’s Justice for All Program where he worked in Govt Legal Aid program in the root level. He participated as a researcher in 10th Henry Dunant Memorial Moot Court Competition. He was the mooter of champion team of Barrister Syed Ishtiaq Ahmed and Justice Naimuddin Ahmed Memorial Moot Court Competitions. Iftekhar won the Justice KM Sobhan Memorial ‘Best Mooter; award in 16th Human Rights Summer school. He also achieved the ‘Best Performance Award’ in 2nd Winter school. Iftekhar works as an executive member of Rajshahi University Moot Court Society (RUMCS). He holds fellowship of 16th Human Rights Summer School, organized by ELCOP and 2nd Winter School, organized jointly by Liberation War Museum & Center for the Study of Genocide and Justice. Iftekhar is currently working with Liberation War museum on a research of collecting memories of Liberation War of Bangladesh. He can be reached at isahriar@gmail.com.