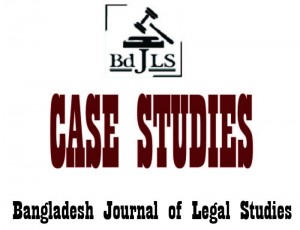 One Nurul Islam Chowdhury availed a credit facility from Social Investment Bank Limited by mortgaging the property in question. When he defaulted in paying back the loan, the Bank sold the property in auction for the purpose of realization of the decretal amount. At this stage the Petitioner filed an application under Order XXI rules 90 and 91 of the Code of Civil Procedure and section 32 of the Artha Rin Adalat Ain, 2003 ( the “Ain of 2003”) claiming the mortgaged property as their own and also asserting their possession therein. However, no security equivalent to 25% (after amendment the required amount to be deposited is 10% now)  of the decretal amount was furnished as required by section 32 of the Ain of 2003 along with the application to the Artha Rin Adalat.

Hence the court rejected the application by an order dated 16 February 2010. Against this order, the Petitioner filed an application in the High Court Division and obtained a rule. This rule was contested by the Bank stating, inter alia, that the mortgaged property had already been sold. Hearing the Writ Petition, the HCD discharged the Rule and hence the Petitioner filed a petition for leave to appeal before the Appellate Division.

For a third party to raise any objection against the execution of a decree of the Artha Rin Adalat, conditions mentioned in section 32 of the Ain of 2003 has to be followed. One needs to deposit 10% of the decretal amount before filing the application.

The Leave to Appeal Petition was dismissed as AD held that there was no merit in the Petitioner’s case. It upheld the HCD’s view that Artha Rin Adalat was right in rejecting Petitioner’s application for not depositing security along with the application. The AD observed that a mere reading of sub-section (2) of section 32 shows that it is the precondition to deposit security equivalent to 25% of the decretal amount in order to lay claim to an immovable property involved in an execution case by a third party.

For a third party to raise any claim to a property against the execution of a decree of a Artha Rin Adalat, conditions mentioned in section 32 of the Ain of 2003 has to be followed. One needs to deposit 10% of the decretal amount before filing the application. This is a defence mechanism against vexatious claims designed to delay the execution of a decree or order of the court. Because the court can seize the deposited money and give it to the decree holder in case of vexatious claims.