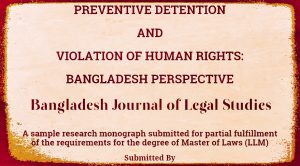 Chapter 3: Preventive Detention Under thr Constitution of Bangladesh and other statutory laws

Preventive detention means detention of a person without any trial or conviction by a court, but merely based on suspicion in the minds of the executive authority that        one might be a threat to peace and security. The violation of Human rights has started from very beginning of our civilization. It is being made in culture of violation of human rights through preventive detention all over the world, especially     in the third world countries.

Arbitrary arrest, detention and custodial torture by law-enforcing agencies have remained a persistent feature of our criminal justice system. These practices    have been widespread in Bangladesh irrespective of the forms of government and successive governments have failed to stop this endemic problem. Arbitrary arrest, detention and infliction of torture are unacceptable in any form of government that is committed to democracy and the rule of law. Despite the legal and constitutional provisions against arbitrary detention, the practice is rampant in Bangladesh. Against this background, the higher judiciary in Bangladesh has taken a proactive stand in prevention of arbitrary arrest and detention and delivered a number of guidelines in some Public Interest Litigation (PIL) cases for initiating legal reform by the government.

This research aims to examine the negative impact of preventive detention on our society by scrutinizing various leading decisions by the Supreme Court. It also tries to examine the need for amendment of the preventive detention laws of Bangladesh. Overall, this research provides insight into how the structure of political institutions interacts with legal frameworks during emergencies to contribute to the formulation of preventive detention systems. The findings of this investigation are instructive for answering a number of questions regarding the relationship between decision-making and the protection of human rights.

1.2 Context of the Research

Arbitrary arrest and detention which is understood in other words as preventive detention derived from the misuse of Special Powers Act- 1974 causes a great violation of human rights and protection thereof. Arbitrary detention by law enforcing agencies have remained a persistent feature of our criminal justice system. These practices have been widespread in Bangladesh irrespective of the forms of government, and successive governments have failed to stop this endemic problem. Torture while detention is typically committed by different state agencies-law enforcing, intelligence and security agencies, which include police army, para-military forces, coast guard, navy forces, prison officers and security agencies such as the National Security Intelligence (NSI) and Director General of Foreign Intelligence (DGFI). Usually, the venue of custody is the police station. But arrested persons are also frequently taken to the cantonment, or to unknown locations for interrogation by police-army joint cells, which is clear violation of law. Arbitrary detention is unacceptable in any form of government that is committed to democracy and the rule of law.

Though preventive detention was introduced to face the grim and grave situation to deal with the problem, it has some lacunas. This study reveals that with whatever saintly motive the Special Powers Act may have been enacted, it has been used invariably to repress people whom the administration do not like. Though our Constitution has inserted the provision regarding the safeguards of preventive detention, these are not sufficient and the law enforcing agencies as well as the court administration are not interested to the provisions and the common people have little knowledge about these safeguards.

This study is based on an analytical approach and critical appraisal of judicial decisions of the Supreme Court of Bangladesh. For the purpose of the study, relevant judicial decisions have been collected from various sources and analyzed to identify the main trends on the issue. The study has also reviewed the existing legal framework on arrest, detention and torture under both national and international law. My research monograph is totally based on the books, articles, and journals, newspaper reports, reports by many Human Right Organizations and internet survey. In my research monograph I will take help from national statutory provisions, case laws, website, international journals and the help from my supervisor.  The legislation governing the administration and management of the preventive detention in Bangladesh is enumerated as The Special Powers Act -1974, The Code of Criminal Procedure -1898, The Emergency Power Rule -2007 and Article-33 of the Constitution of Bangladesh. The Special Powers Act provides provision regarding preventive detention, article-33 of Constitution of Bangladesh provides safeguards against preventive detention and section 54 of CrPC says about the general Power of Arrest by Police. Besides these, Constitution of India, The Penal Code of 1860, The Security Act-1952, The East Pakistan Public Safety Ordinance-1958, Arms Act-1878, the Explosive Substances Act- 1908 and the Emergency Powers Act, 1975 have also been scrutinized by the researcher for additional information to enrich the study.

1.4 Justification of the Study

1.5 Aims and Objectives of the Study

The aims and objectives of the study are as follows-

1.6 Methodology of the Study

The methodology of the present research work include- Review of related literature and examination of important principle document, law Book and Based, Journals, law ripcord DLR, ILR, Periodicals and Judicial precedence concern with preventive detention in Criminal Justice System. Research method of documentary analysis or content analysis has used which has helped me to focus the concept of preventive detention in existing laws and to find out the demerits of the present preventive detention system in Bangladesh. Side by side the analytical research method has helped to find out the purpose of the study, relevant judicial decisions have been collected from various sources and analysis to identify the main trends on the issues.

Data has been collected for this study from both primary as well as secondary sources. This is a critical study on the issue of preventive detention statute, case law and existing research report as primary source. I have also used text books, journals and information from internet as secondary sources in order to give complete shape to the study.

1.9 Limitation of the Study

Though there are huge information in text books, journals and in internet it’s not sufficient. I have to also give concern about time and cost. Furthermore, the present study is undertaken as part of fulfillment of the requirements of LLM degree. The researcher gets only one month to complete the research. Moreover, the research is directed to be within prescribed word limit. Therefore, there is not much scope for doing a comprehensive study. Yet, I try my best to fulfill the objectives set out in the present study.

The research is under the following heading “Preventive Detention and Violation of Human Rights: Bangladesh Perspective”. The research will be divided into six different chapters. The chapters are as follows: