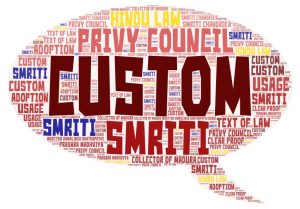 “For under the Hindu system of Law, the clear proof of usage

will outweigh the written text of the law.”

Whether an adoption made by the widow was valid with the consent of the sapindas without the husband’s authority?

The Privy Council evaluated different Schools and sources of Hindu law while delivering its judgment in this case. After tracing the historical development of Hindu law, the Court held that clear proof of usage usage will outweigh the written text of the Hindu law. Hindu law should be administered from the viewpoint of usage of the written texts of law.

Custom is one of the most important sources of Hindu Law. It is important to the point that, if any conflict arises between a custom and the text of the Smritis, which is a written source, such custom will override the text.

The Privy Council based their decision on the Smriti Chandrika and Prasara Madhviya, which are the most authoritative source in Hindu law regarding adoption, and concluded that in the Dravida School, even in the absence of authority from husband, a widow is entitled to adopt a son with the assent of his sapindas or kindred. The Privy Council observed: “For under the Hindu system of Law, the clear proof of usage will outweigh the written text of the law.”