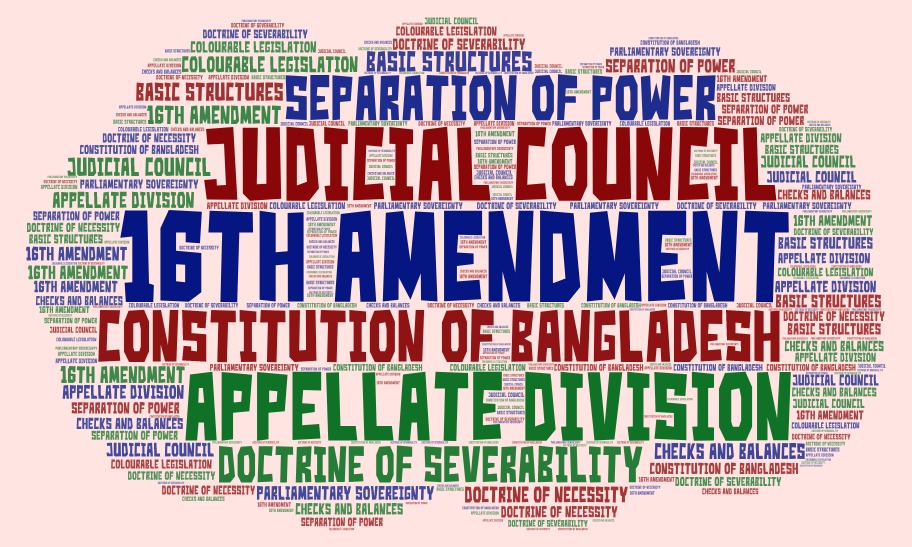 Case Title: Government of Bangladesh and others vs Advocate Asaduzzaman Siddiqui and others

Reference: CIVIL APPEAL NO.06 OF 2017 of Appellate Division.

“Neither individual judges nor the judiciary should be accountable to the executive.”

“Essential to the rule of law in any country is an independent judiciary-the Judges not under the thumb of other branches of the government and therefore equipped with the armor of impartially.”

“In Masder Hossain, 52 DLR(AD) 82, this court held that security of tenure which includes security against interference by the Executive or other appointing authority is an essential feature of the independence of the judiciary.”

“Bangladesh where the election disputes are heard by the Judges of the High Court Division and on appeal by this Court. There are many cases pending against the Executives and Parliament members and the disposal of which may not be fair if the judicial removal mechanism is kept with the Parliament.”

Read the full judgment of the Appellate Division in Secretary, Ministry of Finance vs Md Masdar Hossain and Others ( 52 DLR (AD) 82/ 20 BLD (AD) 104)

“No nation, no country is made of or by one person.”

“If we want to truly live up to the dream of Sonar Bangla as advocated by our Father of the Nation, we must keep ourselves free from this suicidal mindset and addiction to ‘I alone’, that only one person or one man did all this.”

“Now power, not merit, tends to control all public institutions of the country. It is an irony that while unflinching determination and indomitable spirit enabled us to free a country from the clutches of a military power, we have been measurably defeated by ourselves in that very free country,”

“No nation – no country is made of or by one person. If we want to truly live up to the dream of Sonar Bangla as advocated by our father of the nation, we must keep ourselves free from this suicidal ambition and addiction of ‘I’ness. That only one person or one man did all this and etc. If we look at the example from USA’s town planning; they recognised the person who worked for their town planning. For abolition of slavery, Mary Todd, wife of 16th President Abraham Lincoln, got recognition.”

“For the establishment of women rights there are other persons who got the recognition and they also remember with great acknowledgment of four Army Generals. But in our country a disease has infected us and the name of that disease is ‘myopic politicization’. This is a virus and unfortunately this has infected our political culture to such a length that many of our policy makers now are hardly able to see or envision a future meant for a nation, not for a person. Due to this rotting disease, they have personified each and everything. For their narrow and parochial party interest they have established a fake and ‘pseudo democracy’ taking the shameful unfair advantage of our constitution – a constitution written with the blood ink of our martyrs in 1971…”

“After independence, unholy alliances of power-mongers reduced this country to a banana republic twice. They bluffed and hoodwinked the people to legitimise their illegal exercise of power.”

“More so, in a unitary form of government there cannot be any separation of power in absolute sense of the word and therefore, the Parliament and the Judiciary are required to work in a harmonious way.“

Doctrine of Basic Structure and Constitutionality of 16th Amendment:

“‘it goes without saying that judges being human being may make mistakes, some of which are unintentional but with devastating effects on individuals. Those mistakes may be rectified through several layers of appeal and review’. It adds that ‘judges can be removed following a due procedure. They cannot be removed or punished for bona fide errors or for disagreeing on a particular interpretation of law.”

“In the first place, I am absolutely in agreement with the learned Attorney General’s submission that a provision added by a martial law government cannot be placed in our hard-earned constitution, but a provision which in content and spirit is absolutely in harmony with the scheme of the constitution and was incorporated in the body of the constitution by a democratic government and competent Parliament by way of amendment cannot be declared all on a sudden as conflicting only because the text of the provision is similar verbatim with the provision that was devised by a martial law regime.”

“In the Fifth Amendment case, this court approved clauses (2), (3), (4), (5), (6) and (7) of article 96 for two reasons, firstly, it was transparent procedure and secondly, if it was retained, it would safeguard the ‘independence of judiciary.”

“This Court kept in mind the doctrine of severability to limit the application of judicial verdict and observed that in doing so; the court can modify or even dismantle a legislation in the interest of justice. The court in such circumstances did not subscribe to the notions that all acts of the usurpers are illegal and illegitimate. The court took into consideration of the acts, things, legislative actions which are useful or which acts, things, deeds tend to advance or promote the need of the people or all acts, things and deeds which are required to be done for the ordinary functioning of the State or the acts, things, deeds and legislative matters which would augment the independence of judiciary and welfare of the people etc.”

“Learned Attorney General argued that even if this amendment is declared ultra vires the constitution, if the Parliament does not restore the earlier provision of the Judges removal mechanism by the Supreme Judicial Council, a deadlock would be created in the removal process of the higher judiciary. Secondly, he submits that the earlier provision of Supreme Judicial Council mechanism for removal of Judges was non-functional in the absence of the prescribed Code of Conduct.”

“This Judges removal mechanism was made by substituting the old provision. In section 2 of the Act it is said, ‘In the Constitution, in article 96, for clauses (2), (3), (4), (5), (6), (7) and (8), the following clauses (2) (3), and (4) shall be substituted.’ As per law if a substituted provision is declared void or repealed, the former provision shall be effective immediately. This court in Ful Chand Das V. Mohammad Hamad, 34 DLR (AD) 361 held that when a provision of law repealed by a statutory provision which is declared ultra vires the constitution, the former provision is automatically revived on such declaration. If the amended statute is wholly void, the statute sought to be amended is not affected but remains in force. Where the law was amended but subsequently the amendment was repealed, the amendment has to be completely ignored and the provisions of the law as they stood prior to amendment are to be taken into consideration. (Mir Laik Ali V. Standard Vacuum Oil Co., 16 DLR (SC) 287. In Ram Dayal V. Shankar Lal, AIR 1951, Hyd 140(FB), it was held that when an Act passed repeals another in whole or in part and substitutes some provision in lieu of the provision repealed, the repealed enactment remains in force until the substituted provision comes into operation..”

“The decisions of the apex court of the country are final not because they are infallible, but because the decisions are infallible as they are constitutionally final. By the impugned amendment, the removal mechanism of the Judges of higher judiciary by the Supreme Judicial Council has been  substituted by the Parliamentary removal mechanism. Since this amendment in ultra vires the constitution, the provision prevailing before substitution is restored.”

“Since this amendment is ultra vires the constitution, the provision prevailing before the substitution is restored. The appeal is accordingly dismissed.“

Mutual Respect Between the Court and Parliament:

“The above observations by the High Court Division regarding the members of Parliament are totally uncalled for and we do not endorse this view at all. The court or the Judges should not make such derogatory remarks against the members of Parliament. There should be mutual respect and harmony between the court and the Parliament. Similarly the Parliament should not make any comment or remark or aspersion against any findings of the Supreme Court in any proceeding which is barred by article 78(2) of the constitution and rules 270 & 271 of the Rules of Procedure of Parliament.”

Impact of Article 70 in the Judge Removal Process under 16th Amendment:

“We are of the view that in presence of article 70, it is difficult for a member of Parliament to form an opinion independently ignoring the directions given by the party high command of the political party in power. That being the position, it cannot be said to be exaggerated that the members of the political party which gains majority in the Parliament cannot remain independent when the question of removal of a Judge would arise because the removal proceeding will be taken in the Parliament by the political party in power and under such scenario, it will be questionable as to what extent the members of Parliament would act impartially free from partisan political pressure at the time of exercising the power of removal.”

“Without a political tradition in which members of Parliament could clearly demonstrate that they can act neutrally and impartially if they are given the power of removal and will not be affected by the party’s views under article 70, the purported process of impeachment introduced by Sixteenth Amendment would clearly undermine the independence of judiciary and will definitely alter the basic structure of the constitution.”