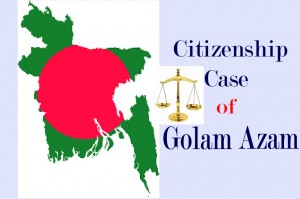 Professor Ghulam Azam, the plaintiff in this case, became the Amir of Jamaat-e-Islami of East Pakistan in 1969. He was in this post till 1971. He was opposed to the Liberation War of Bangladesh from the start. He and his party sided with the Pakistan authorities at the time. Before Bangladesh won victory on December 16, 1971, Ghulam Azam left the country on November 22 and went to Pakistan and continued to live there.
On April 28, 1973, the citizenship of 38 pro-Pakistani political persons, including Ghulam Azam, was cancelled by the Government under Article 3 of the Bangladesh Citizenship (temporary provisions) Order, 1972. The government argued that Golam Azam had been living outside Bangladesh since before the liberation as a citizen of Pakistan. His anti-liberation role, active collaboration with the Pakistani army and voluntary residing in Pakistan made him ineligible to be a citizen of Bangladesh.
On January 17, 1976 the Government invited applications from those persons whose citizenship had been cancelled by the previous Government for restoration of their citizenship. Ghulam Azam immediately applied for citizenship from London. He applied again in 1977 and 1978. In 1978 he came to Bangladesh on a Pakistani passport. He was given a visa on “humanitarian grounds”, to visit his ailing mother. Then he renewed his visa three times and even after his visa expired, he continued to live in Bangladesh. He was, however, arrested and detained at the Dhaka Central Jail by an order of detention dated 24 March 1992 under section 3 of the Foreigner’s Act, 1946.
Ghulam Azam submitted a writ petition to the High Court, requesting for his citizenship to be restored. His petition was accepted by the High Court and his citizenship was restored. He argued that his father, grandfather and he himself were all born in this country and he was a permanent resident in Bangladesh on March 25 1971 and continued to be a permanent resident. He only went to Pakistan to attend party work and later on prohibited to enter into Bangladesh. So he went to Saudi with a Pakistani passport and with that he entered into Bangladesh and immediately surrendered his Pakistani passport and filed an application for restoration of his citizenship.
An appeal was brought against the judgment of the HCD.

The Appellate Division held that, ‘Citizenship, though not mentioned as a fundamental right in our Constitution, is to be considered as the right of all rights as on it depends one’s right to fundamental rights expressly provided for a citizenship in Part III of the Constitution and his right to seek Court’s protection of those rights.’
It also observed that, ‘Even a diehard pro-Pakistani, born in this country, is entitled to be a citizen of Bangladesh if he fulfills the requirements under Article 2 and is not disqualified under clause (1) of Article 2B.’

And in this case Professor Azam fulfilled all the criteria set in Article 2 and also proved his allegiance to Bangladesh by surrendering his Pakistani passport. Also his domicile was not changed because of his living in Pakistan because domicile of choice only occurs when a person resides in a particular country with specific intention of living there permanently. But he had no such intention.

Honorable M Habibur Rahman J farther argued that the notification under Article 3 of the Bangladesh Citizenship (Temporary Provisions) Order 1972 was ultra-virus as it was given in the presumption that Golam Azam was already a citizen of Pakistan. Government side presented the evidence of his passport as a proof of his citizenship of Pakistan but the court rejected the argument as it held that Citizenship is neither conferred by giving a passport nor it is acquired by receiving a passport. It may only be a travel document.
Thus the appeal was dismissed.